Would you ever say that this is an automotive museum?! 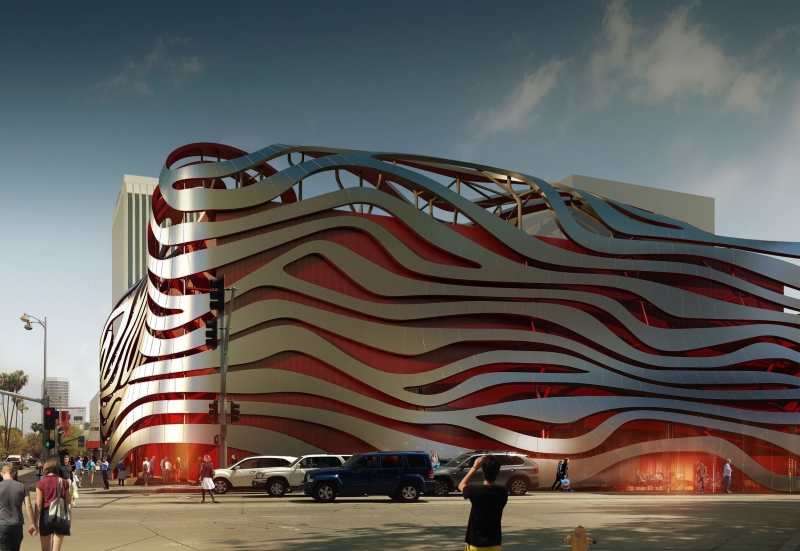 After some 14 months of renovation works the Petersen Automotive Museum in Los Angeles looks spectacular and is impossible to miss.

Robert E. Petersen, the creator of the Hot Rod auto magazine who followed up with Motor Trend and many others, finally built a media empire. Along the way, he also endowed a car museum in Los Angeles, the Petersen Automotive Museum, which opened in 1994. The Petersen museum became a mecca for car fans, but in recent years it had become clear that it was in need of a major upgrade. So a group of deep-pocketed L.A. car enthusiasts got involved to help oversee a renovation. After some 14 months of work, the Petersen museum is spectacular: the exterior has been covered by an amazing display of large flowing metal strips over a red building. It’s a controversial look, praised by some for it audacity, criticized by others for its flamboyance. Whatever your take on the Petersen’s new look, it’s now impossible to miss. Inside, one area features classic French cars with flowing shapes developed by coach building legends such as Figoni et Falaschi and the hand of Jean Bugatti. Arguably the most spectacular room has nothing but cars painted silver, including the original Corvette Sting Ray, a “Twenty Grand” Duesenberg, a McLaren F1, one of the aero Mercedes-Benz W196 Grand Prix cars, and a 3.0-liter Ferrari Testa Rossa.